In 1931, three Dominican Sisters traveled up the Hill to take possession of our beautiful school carrying only “a statue of the Blessed Virgin, a $5 bill and their faith.” FSHA has grown in ways no one could have imagined then, and today offers cutting-edge academic opportunities, unparalleled co-curricular experiences and a dedicated and talented faculty.

Fill out the inquiry form.

When students have the privilege of learning in an environment based on centuries of Dominican teachings and traditions, the pursuit of truth—in their studies, their faith, their service, and their community—becomes the fabric of their daily lives as it has for the thousands of young women that came before them. As a Catholic, Dominican school, Flintridge Sacred Heart is committed to educating the whole person in a setting that allows adolescent girls to flourish into young women that are well-prepared for college and beyond.
Flintridge Sacred Heart, a Catholic, Dominican, independent, college-preparatory, day and boarding school, educates young women for a life of faith, integrity, and truth.

To this end, Flintridge Sacred Heart strives to partner with parents in the formation of their daughters. We recognizes the interdependence of physical, emotional, spiritual, intellectual, social and environmental health, and their benefits for learning. Thus, Flintridge Sacred Heart offers a rigorous college-preparatory curriculum, outstanding visual and performing arts, an excellent athletic program, a dynamic campus ministry and service program, formative leadership opportunities in clubs, athletics and co-curriculars.

Commitment to Diversity and Inclusion

Diversity is a vital element of Flintridge Sacred Heart's mission to educate young women for a life of faith, integrity and truth. At Flintridge Sacred Heart, we seek to create and sustain a vibrant, inclusive community and we value and appreciate the uniqueness contained within each person so as to honor the diversity of God’s creation. 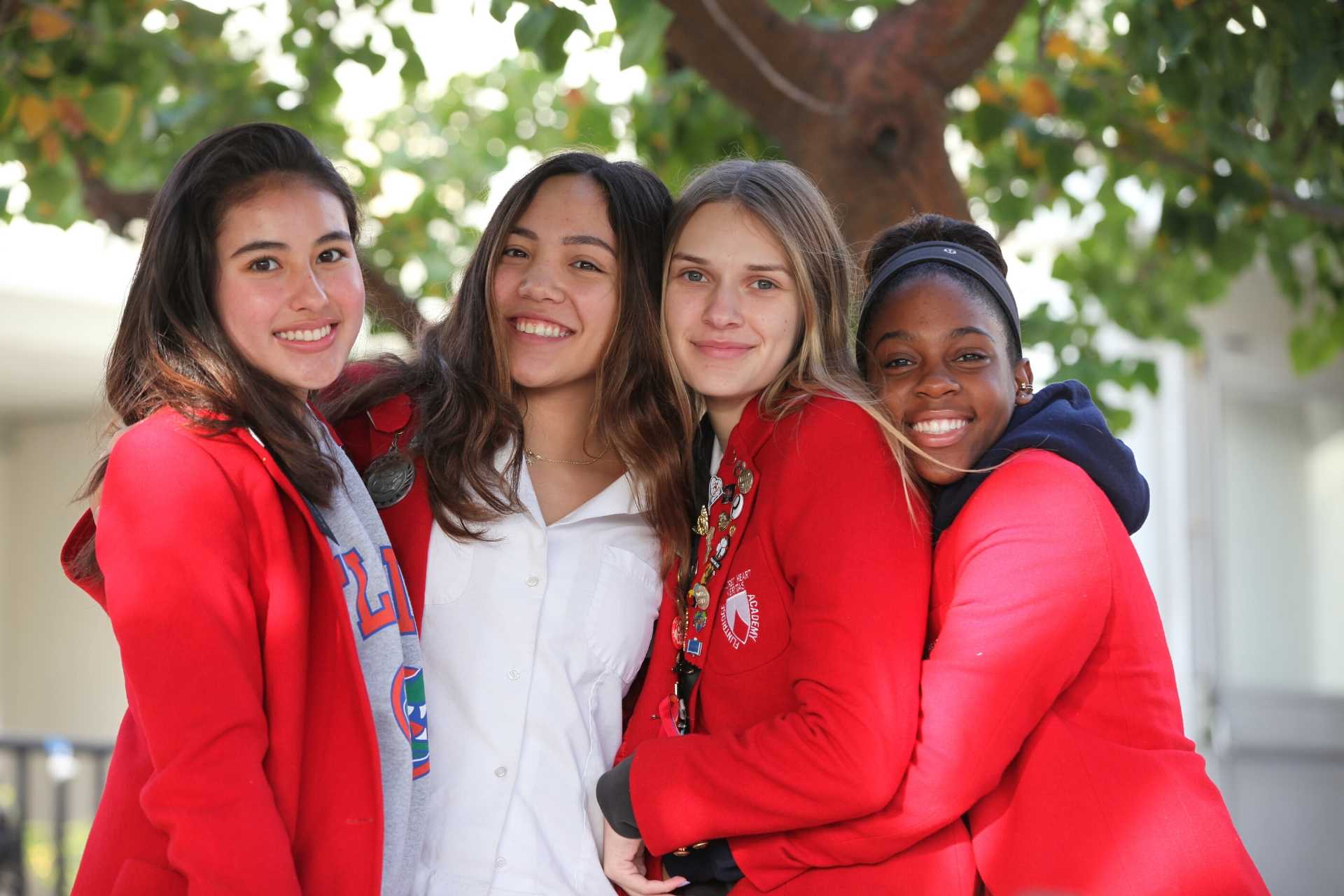 The Dominican Order (also known as the Order of the Preachers) is a Roman Catholic religious order best known for their commitment to holistic education, the pursuit of truth (Veritas) and their focus on preaching — spreading the Gospel through words and actions to inspire change. Founded by St. Dominic de Guzman (1172-1221) in 1219, the order embraced a life of prayer and study, which led to a ministry of preaching in poverty – the early beginnings of the four Dominican pillars of Prayer, Study, Community and Service.

When we inspire a girl to seek truth—or as we call it, “Veritas,”— we unlock her limitless potential to positively impact the world.

Latin for “truth,” Veritas is one of the mottos of the Dominican order. Dominicans are searchers. They are constantly in pursuit of a deeper and fuller understanding of the truth. Whether it be in their studies, their relationships, their faith, or elsewhere, Dominicans are constantly craving and pursuing the truth in all things.

History of the Hill

Flintridge Sacred Heart Academy was founded by the Dominican Sisters of Mission San Jose in 1931. The school’s original Mission-style buildings, designed in 1927 as a resort hotel by noted Southern California architect Myron Hunt, overlook the San Gabriel Valley and the Pasadena Rose Bowl from the crest of the scenic San Rafael Hills.

The resort, originally built and managed by Senator Frank P. Flint, opened in 1927 as the Flintridge Hotel and was soon after sold to the Biltmore Hotel chain. Unfortunately, the hilltop retreat was deemed too expensive to maintain and closed shortly after the onset of the Great Depression. At the same time, the Dominican Sisters of Mission San Jose were making plans to build a convent and girls’ school on a tract of land they had purchased in Sierra Madre.

After hearing about the hotel's closure, Archbishop Cantwell, the first archbishop of the Archdiocese of Los Angeles, contacted the Dominican Sisters and suggested that the abandoned hotel would suit their needs. After careful consideration, the Sisters purchased the entire resort — including the nine original buildings, hotel furnishings and surrounding land — at auction for $150,000. According to legend, on August 15, 1931, three Dominican Sisters traveled up the hill to take possession of their new school, bringing a five-dollar bill, a statue of the Blessed Mother and their faith. The school opened for the first day of classes two weeks later — on September 2, 1931 — with 200 students enrolled in grades 1 through 12.


Originally a boarding school, Flintridge Sacred Heart began accepting day students in 1952, phasing out the elementary grades and becoming exclusively a high school. From the beginning, the school’s day population drew from a wide geographical area that now includes the entire Los Angeles basin, with many joining us from the neighboring communities in the San Fernando and San Gabriel valleys. International boarding students have flocked to Flintridge Sacred Heart from all over the world since the day the school was founded!

Since Flintrige Sacred Heart’s inception, the Dominican Sisters, as well as many dedicated professionals, have provided leadership and staffing for the school, its classrooms and residence halls. Together, they have built a school committed to the development of young women through its challenging academic program, complemented by a lasting commitment to an arts education, a vibrant campus ministry, Christian service, a competitive athletic program and a history rich in tradition.

Today the congregation is made up of 195 Dominican Sisters who live in northern and southern California, Arizona and Mexico. The Dominican Sisters of MSJ sponsor three schools— Flintridge Sacred Heart, Immaculate Conception Academy, a Christo Rey school (all girls college prep high school) in San Francisco and Saint Catherine Academy, an elementary boys boarding day school with a military tradition in Anaheim. 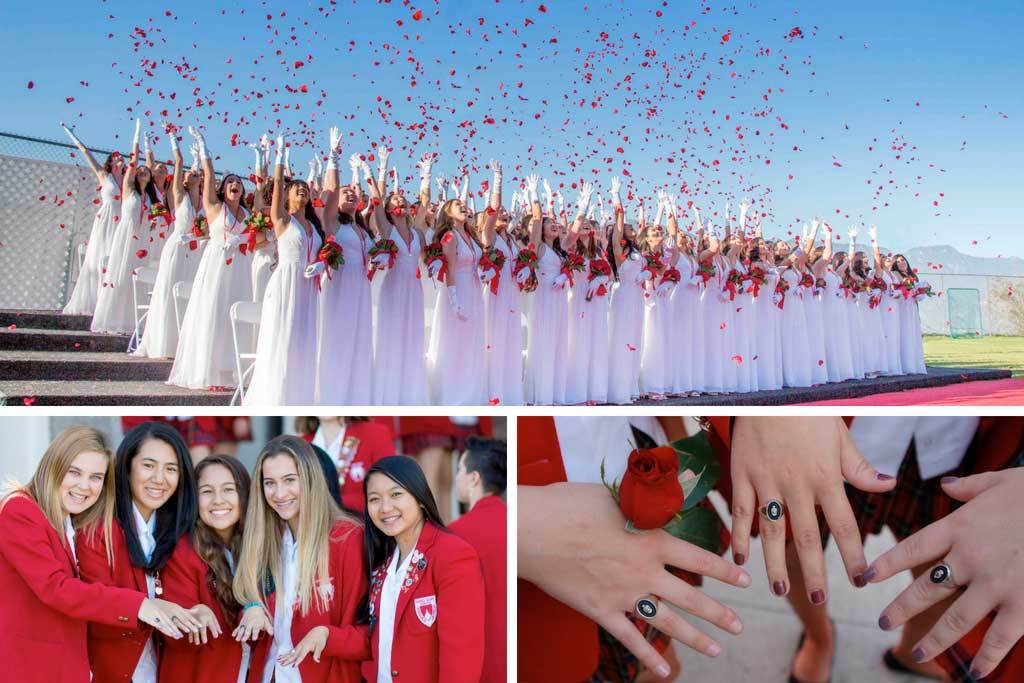 Red roses are a big part of the Flintridge Sacred Heart experience, representing the love and sisterhood that’s shared among the girls. At the Junior Ring ceremony each fall, seniors present their junior classmates with their new class rings – which are very similar to the rings worn by alumnae from the 1930s and 1940s – and receive a single red rose in return. The ritual repeats itself at Candle Rose (left) at the end of the year, when seniors and juniors exchange lit candles and roses, symbolizing the transfer of wisdom and leadership to the younger class. Every senior who walks at Graduation carries a bouquet of red roses, and after the graduates sing the alma mater together for the last time as a class, they toss rose petals from their bouquets in the air to celebrate.

"Amazing teachers inspired us as women and we knew that this school was run by women who could run the world. I left here feeling powerful.” —Jan Ellison ’83

Our Governance & Past Board Members

Flintridge Sacred Heart, founded in 1931, is a sponsored institution of the Dominican Sisters of Mission San Jose. The Board of Directors, comprised of religious and lay members, was established in 1999 and is one of limited jurisdiction. Its structure has two tiers. For more information and for a list of past board members, please visit our governance page.

Flintridge Sacred Heart Academy is an all girls' Catholic, Dominican, independent, college-preparatory day and boarding high school in the hills of La Cañada Flintridge. Overlooking Pasadena, FSHA educates girls from Los Angeles, Southern California and around the world for a life of faith, integrity and truth.