Stagecraft Instructor
Technical Director
ComedySportz Moderator
Started 2021
I have been designing and building theatre shows with Miss Mac for 22 years, the last four right here on the hill. As I got to know the school, the students, the faculty, and the families I knew it would be a great long-term fit. 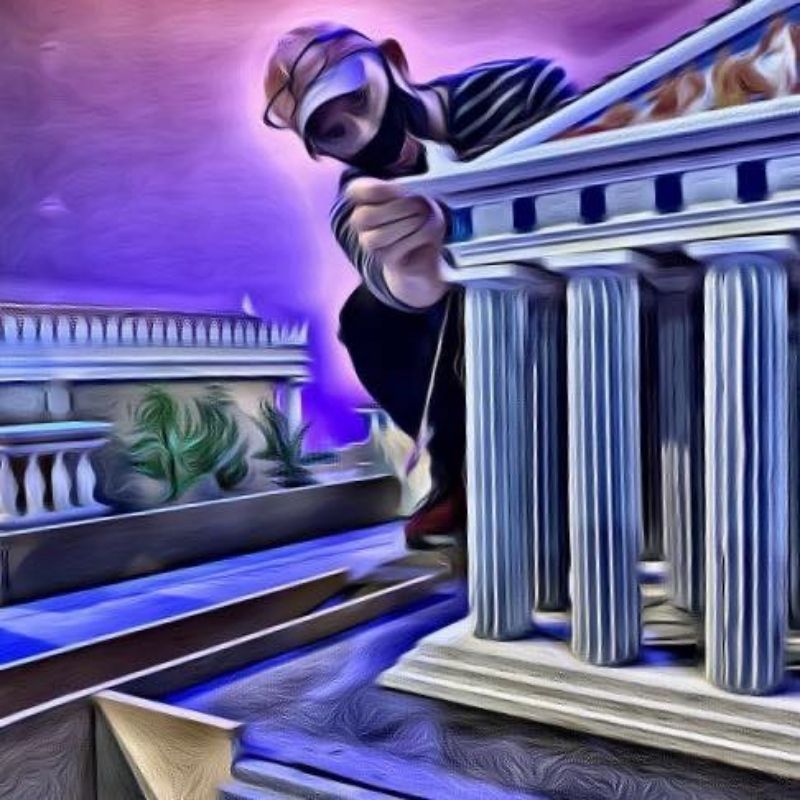 What is your role at Flintridge Sacred Heart?


What do your students call you?


What made you want to work at Flintridge Sacred Heart?

Jane McEneaney works here!  I have been designing and building theatre shows with Miss Mac for 22 years, the last four right here on the hill.  As I got to know the school, the students, the faculty, and the families I knew it would be a great long-term fit.


What has been your proudest professional accomplishment?

Designing/building six-foot-tall pop-up books for the LA Philharmonic at Walt Disney Concert Hall. Six different books on seven-foot music stands, all visible to the audience 360-degrees. Jane was guest directing and had the vision for the piece; they had hired the country's top pop-up engineer.  I was just supposed to observe/assist....going-to-school on the whole process.  But there was a squabble over pay and assistants, and the engineer was out.  So I fell into an incredible opportunity, and they trusted me to make good on Jane's vision.  Two straight months of designing, prototyping, building.  And once they were all made, only the union workers were allowed to handle them and position them on the stage, which was unexpected and tough for me. Jane and I sat in the audience, holding clenched hands, fingers crossed, for 15 minutes as they played Smetana's Vltava, and each pop-up opened to illustrate the story of the Moldau River winding its way through the countryside and into Prague.  It was the most nerve-wracking, exciting and proud moment I've ever had.


What most excites you about your work here on the Hill?

That the scene shop in the newly remodeled VAPA Center is NEW, and the stagecraft students and I are literally building and filling it together as we go. I like that many people haven't seen it or are just now seeing it - I like their reactions when they first walk in - that they see the theatre department has this great well-equipped space, and they see what the stagecraft students get to work with, and what they're working on. It's awesome!

That our theatre is haunted by the ghost of Trixie Friganza. https://en.wikipedia.org/wiki/Trixie_Friganza


What do you love about the all-girls environment at Flintridge Sacred Heart?

Hmm... I don't have a fully-formed thought on this, yet, but these things jump immediately to mind:  I like watching the girls interact with the strength of female administrators here, both clergy and lay.  And there is something pleasant about the lack of distraction inherent in most coed academic environments.


What's your favorite spot on campus?

Iggy's booth at the main gate. Great starting every day with him - trading bits of wisdom and whatnot, and when passing throughout the day.


When not in the classroom/office, where can you be found?

In a theatre.  At a hardware store.  In "The Boneyard" - my art studio.


What's your favorite place in the world?

On an outcropping of rocks at El Segundo beach— I get there as often as possible for the sunset.


What are you surprisingly good at?

Recognizing famous and obscure actors or celebrities by their voice alone.


Who has made the biggest impact on your life?

My great-aunt, Johnell Crimen. She was an artist in west Texas, she lived to be 97, and was the most inspired and enthusiastic gentle soul you've ever met. She taught me about art, and nature, and people.

What book, movie, work of art, piece of music, etc. can you not imagine life without?

The wind chimes hanging in the scene shop; they were a gift from Jane McEneaney years ago, and they are perfect!  Also, Mel Brooks movies, Shaun Tan books, Andy Goldsworthy's art (often only sustained in photograph/book form because they are organic sculptures, most which degrade or dissipate quickly).


What do you want to be when you grow up (now)?

Founder of The Theatre Samaritans—  a skilled artisan group which trains and oversees a social network of volunteers, coordinating and providing free supplemental skilled labor to local theatres.


Flintridge Sacred Heart admits students of any race, color, national and ethnic origin to all the rights, privileges, programs and activities generally accorded or made available to students at the school. It does not discriminate on the basis of race, color, national and ethnic origin in the administration of its educational policies, admissions policies, financial aid, and athletic and other school-administered programs.