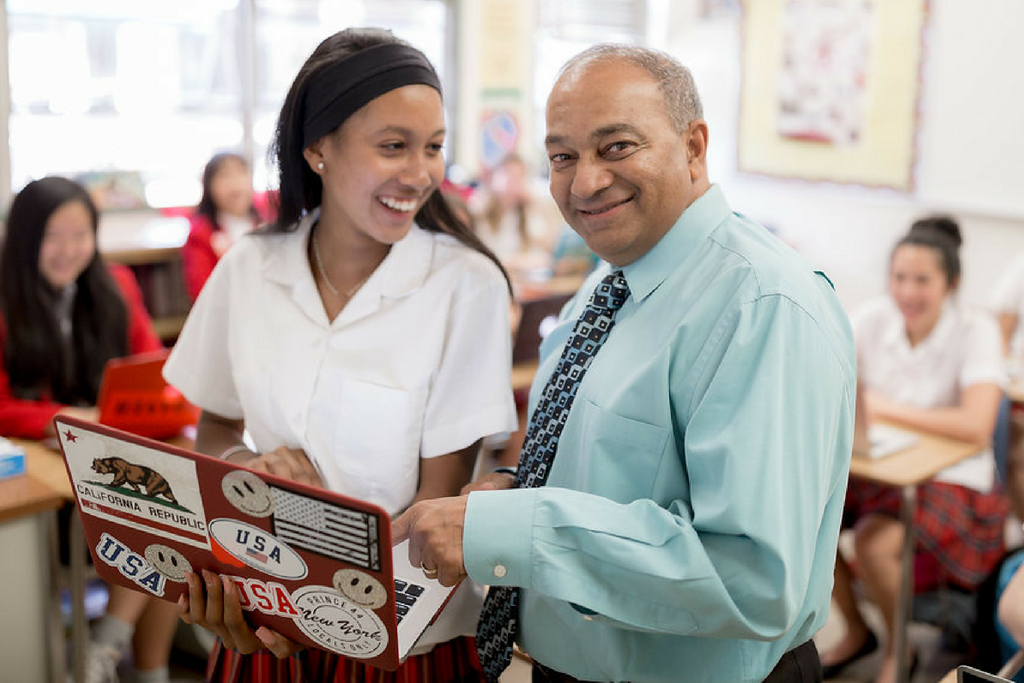 During assemblies, you’ll often hear Tologs break into a certain chant, “D’Mello, D’Mello.” Beloved religion teacher Olympio D’Mello always gets a warm reception no matter where he goes. When he’s not teaching world religion, you can find him donning a silly wig for St. Patrick’s Day, coaching JV tennis or auctioning off his famous Indian dinner party at Gala. He filled us in on why it’s important Tologs learn about world religions, his favorite assignments and what it’s like coaching academic decathlon.

Why is it important that our Tologs learn about world religions?

Religion, in general, explores the deep questions of life that characterize the human condition. Studying different religions inculcates remarkable cultural sensitivities among students. Following the events of September 11, 2001, Americans opened their eyes to a world that underwent a meteoric global transformation. They came to realize how little they knew of and understood the world outside of the cloistered microcosm they lived in. For the first time, many Americans heard of countries like Iraq and Afghanistan. They stumbled upon the reality that additional religions existed, religions other than Christianity (and maybe Judaism) that they were familiar with. That kind of illiteracy became the catalyst for me to underscore the importance of teaching world religions.

Through this channel, I have exposed my students to the world atlas and to countries and religions they have never heard of before. Learning about the world’s religions has helped the global village come to our doorstep. It is my hope that our Tologs are enriched by an academic grasp of and respect for world religions because the interdisciplinary study they engage in fosters deep intercultural literacy.

What is your favorite religion to introduce to our students (besides Catholicism)? Why?

If I were to choose a favorite religion to introduce our students to, it would be Hinduism. I grew up in India, the melting pot of religions. The dominant religion, Hinduism, is surrounded by an assortment of other beliefs: Islam, Christianity, Buddhism, Jainism, Sikhism, the Baha’i faith, Zoroastrianism and Judaism, to name some. Hinduism, the third-largest religion in the world, has had a huge impact on early civilization in and around India over the last 5,000 years. It is one of the oldest known organized religions, which formed the substructure of Indian culture. Besides, the complexity and esoteric nature of Hinduism captivates the Western mind, making it an attractive field for further study.

How do our international students enhance the discussion of world religions?

The colorful Flintridge Sacred Heart community canvas is multiethnic, thanks in large part to our international students. Many of them are adherents of eastern religious traditions. Their presence enhances the study of world religions because they can identify with and share their experiences from their backgrounds and perspectives.

In turn, the international girls are exposed to western and Middle Eastern faiths that many of the day students are familiar with. The unrelated and unfamiliar paths of one complement the recognizable and well-known paths of the other. World religions become an ideal place for the convergence of east and west, where both international and day students benefit from one another’s cultural, social and religious perspectives; they also understand how these unique traits forge their identities.

You took over the academic decathlon a few years ago. What has that experience been like?

Besides being an educator, I consider myself a hungry scholastic. I am a glutton for learning something new. When the opportunity to coach the Academic Decathlon presented itself, I was more than happy to accept the position. The themes of the last few years - the environment, India, World War II and now Africa – have challenged us with a stimulating wealth of information. The nature of the competition makes it challenging and intellectually gratifying. Our girls have done very well. Two years ago we were on the verge of making it to the state championship. The students who make the team understand that this is a huge obligation, which demands self-motivation, a high degree of responsibility and an avid desire to learn.

What is your favorite part of working at Flintridge Sacred Heart?

Working with the girls on a daily basis in a learning environment that nurtures the wellbeing of every individual brings me immense joy and satisfaction. Being able to expose my students to the world-at-large in a way that encourages respect and love for one another truly embodies my core philosophy and the Dominican values that Flintridge Sacred Heart stands for. I especially enjoy our candid class discussions on God, religion and life.

I am heartened to see how the girls mature intellectually, emotionally and spiritually by the time the sophomore year comes to an end. I treasure the times I see alumnae and hear how they have found fulfillment in their chosen careers and family life, thanks to what they foundationally learned at Flintridge Sacred Heart.

One of the overarching blessings of my daily commute to Flintridge Sacred Heart is knowing that I will spend a gratifying day in the companionship of dedicated, gracious faculty, enthusiastic staff and affectionate students, who are ultimately the raison d’etre of my being an educator.

Back
Flintridge Sacred Heart Academy is an all girls' Catholic, Dominican, independent, college-preparatory day and boarding high school in the hills of La Cañada Flintridge. Overlooking Pasadena, FSHA educates girls from Los Angeles, Southern California and around the world for a life of faith, integrity and truth.