Our STEM program promotes hands-on learning and examines the innovations and challenges that are possible through the disciplines of science, technology, engineering and mathematics. We engage our students with a wide variety of courses and clubs that encourage collaboration, creativity, problem-solving and critical thinking. With state-of-the-art labs, 1:1 laptop program and our unique block system, students have the time and resources to delve deeply into their coursework.

Courses are taught with an inquiry-based model and promote an active learning style, achieved through group work and mentoring. Our capstone course is an honors scientific research lab that focuses on biotechnology technique and research. With this course, students will develop and conduct their own experiments and present those results to the community. 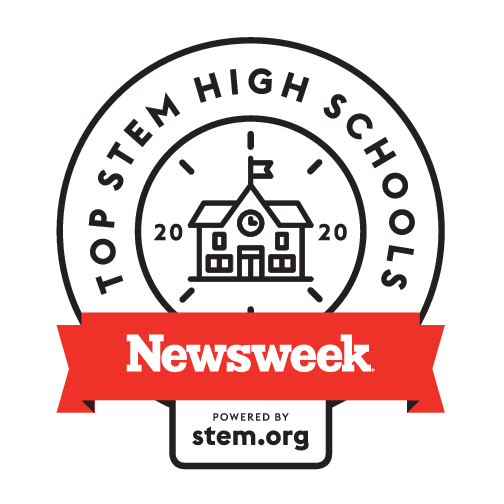 We are thrilled to announce that Flintridge Sacred Heart was named a top STEM school in the United States by Newsweek, in association with stem.org. Nationally, we are ranked 1,029, putting our program in the top 2.5% nationwide. For the state of California, we are ranked 141.

“We’re proud of this award and one of our distinguishing characteristics is that we actually have a computer science and engineering department, which is only two years old and was created in response to our girls’ desire to explore those areas,” said Sherrie Singer, Flintridge Sacred Heart Assistant Principal for Curriculum and Instruction.

In 2018, our students in Honors Scientific Research (aka “Scisearch”) were awarded three Archer STEM Research Grants, which is a STEM initiative sponsored by the Archer School for Girls on the west side. Over $20,000 was available through the merit-based application process; all of our girls submitted proposals and received funding, for a total of $5,500 awarded to Flintridge Sacred Heart. The institutional support from Flintridge Sacred Heart is the primary source of funding for our students’ projects. The outside funding made it possible to purchase a major analytical instrument and expensive reagents that extended the scope of the work proposed by these eight students.

Our student researchers conducted the experiments over the spring semester and presented their findings at Flintridge Sacred Heart's Senior Research Showcase and Archer STEM Symposium events in May.

Katrina Manaloto '20 and Meghan Sullivan '20 were selected as Pitch Competition winners at the she leads entrepreneurship makeathon hosted at the Snapchat headquarters in March 2019. During the two-day event, students "actively engaged in discussions with female entrepreneurs, participated in design thinking and ideation exercises, attended product development and marketing workshops, and got actionable guidance."

Pitch Competition winners “will be paired with a successful female founder to mentor and guide their ideas into reality. The pairs will work together over the following five months through our mentorship program at www.sheleads.io (free of cost). At the end of the five months, mentors will set up a pitch meeting between their student and an angel investor for a seamless transition to launch.”

In describing her pitch, she says "My project is an educational platform to encourage and inform teens to get involved in politics and social justice. We would have a website which I like to refer to as the 'Cliffnotes of politics'. The goal is to have a platform for teens to become informed about social justice issues and find a way to get involved in the issues they research and learn about."
View Meghan's pitch presentation.

At the makeathon, Katrina thought about the various problems she has encountered and would like to fix. Katrina was especially bothered by the lack of authentic teenage voices exploring political and social issues in the media. Describing her project, Katrina says, "To showcase the true opinion of teenagers about current issues as well as provide a platform purely made by teens, I came up with a website called Voice. Voice would provide curated pieces made directly by teens, whether that be writing, art, music, or film, that provide the public with real teenage views on current social and political issues. The adolescent contributors on Voice would receive a percentage of the ad revenue as well in order to support their future goals, especially in education. Motivated, passionate teens will finally have a place to get their work published and appreciated on Voice."

By inviting many more young women to advanced computer science classrooms, Flintridge Sacred Heart has taken a significant step toward preparing all students for the widest range of 21st-century opportunities,” said Trevor Packer, College Board senior vice president of the AP Program. “We hope this inspires many other high schools to engage more female students in AP Computer Science and prepare them to drive innovation.”

AP Computer Science A students learn to design and implement computer programs that solve problems relevant to today’s society. AP computer science course participation increased 135% since 2016, broadening STEM career opportunities for more students. The number of female, rural, and underrepresented minority students taking AP computer science exams has more than doubled in that period.
Providing female students with access to computer science courses contributes to gender parity in the industry’s high-paying jobs and drives innovation, creativity, and competition. According to UNESCO’s Institute of Statistics data, less than 30% of the world’s researchers are women; in North America and Western Europe, it’s just 32%. Research shows women are more likely to pursue computer science if they’re given the opportunity to explore it in high school.

In 2018, four students and a teacher at Flintridge Sacred Heart were recipients of the Award for Aspirations in Computing from the National Center for Women & Information Technology (NCWIT).

Cynthia Hernandez ’18 and Amelia Andrews ’18 received national recognition by NCWIT with honorable mention awards, while Hope Sadahiro ’18 and Maddy Freeman ’20 received regional certificates of distinction. The Award for Aspirations in Computing honors young women in grades 9 to 12, recognizing them for their computing-related aspirations and demonstrated interest in technology, solid leadership ability, academic history, and plans for post-secondary education. Over 3,000 other young women from all over the United States were honored this year.

Originally, I did not know what opportunities I could find in regards to computer science, so I am really grateful to Ms. Finley for including me in many computer science related activities this year. Thank you so much for all that you have done for me and countless girls at Flintridge Sacred Heart Academy." —Hope Sadahiro

The awards and recognition give FSHA greater access to funding and resources through NCWIT.

8 Reasons to Explore a STEM Career According to a Girl

As citizens of the digital age, our lives are increasingly dependent on technology— we cannot leave the house without our smartphones and if our WiFi connection is not strong enough, chaos ensues. However, the more we rely on our phones and computers, fewer people actually understand the principles that drive technology.

My journey from an oblivious consumer to a producer of software was unexpected and unique. It all started when I signed up for Flintridge Sacred Heart’s Robotics I class. Inspired by the popular TV series Grey’s Anatomy, I was convinced that I would pursue medicine and become the next Dr. Christina Yang. Hoping to further my knowledge of the human anatomy, I signed up for sports medicine for my sophomore year. I needed to pick another semester-long elective to complete my schedule, so I decided on robotics because I had heard there was no homework.

Having no experience in technology and being the only sophomore in a class of juniors and seniors made me extremely nervous about this class. To my surprise, I immediately fell in love with robotics— the freedom to control a robot I had built to do whatever I wanted it to was extremely freeing. After only a few weeks of this class, my aspirations for the future had completely changed. No longer do I want to be Meredith Grey— I want to follow in the footsteps of women like Grace Hopper, Ada Lovelace and Helen Greiner. I want to study computer science and become a social entrepreneur and software engineer, or someone who innovates technology to help others and effect global change.

Read on for Hannah's reasons why you should consider a STEM career!

The Code Crew is a community of students who wish to explore programming for web design, gaming, application development, robotics or just for the fun of it! It is open to all students at any skill level.

“Code Crew has empowered me to learn more programming languages, which will give me a head start in my computer science classes in college. It’s created a supportive environment for me to deepen my understanding of programming while encouraging others to do the same.” – Hannah Scott ’17

The Tech Team is a group of students who provide tech assistance throughout the school year and advise the faculty on tech issues from the student perspective.

Sponsored by the library, Tinker Thursdays occur after school. Interested students can attend for an opportunity to experiment with Little Bits (electronic building blocks), Arduino (open-source electronics platform based on easy-to-use hardware and software) and Tinkercad (3D design and printing app).

FSHA has an ongoing relationship with The Boeing Company to offer summer internships to rising seniors who are interested in exploring or gaining experience in science and engineering fields. The summer internships take place on site at Boeing's El Segundo campus over the course of eight weeks in June, July, and August. Students are matched with Boeing employee mentors and get individual training and attention and contribute to actual, ongoing engineering projects as part of the Boeing Engineering team. Internships are also flexible enough to accommodate other activities such as sports programs or family vacations.

Students in Mr. Buxman's engineering class were tasked with developing prototypes that solved some common problems.


Noticing that trash cans in cities are often overflowing, two students developed trashcan prototype that could release trash into an underground tank when full.

Flintridge Sacred Heart Academy is an all girls' Catholic, Dominican, independent, college-preparatory day and boarding high school in the hills of La Cañada Flintridge. Overlooking Pasadena, FSHA educates girls from Los Angeles, Southern California and around the world for a life of faith, integrity and truth.